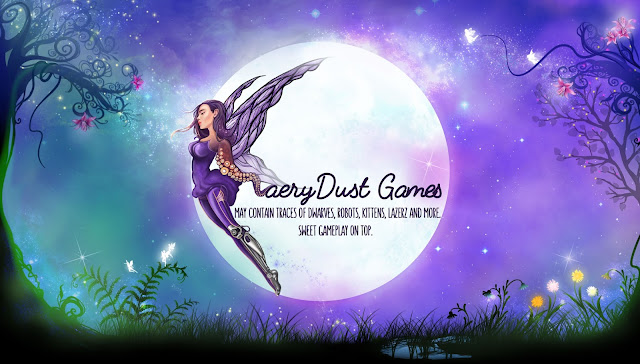 Catalin Marcu: Taking advantage of a trip I made to Bucharest and a pending invite received at the Dev.Play party back in September, I decided to pay a visit to the nice people at Faery Dust Games, a small, but stable game studio, led by Marius, the technical guy and gaming enthusiast, and Irina, the people’s person and mood uplifter in the studio.

We aim to make creative games with great gameplay and a spark of wackiness.

I know Marius back from when Mobility Games helped organizing the GameDEVIS meetups in Iasi. He was a guest speaker, telling us about his small studio’s story, creating military turn based strategy games for a publisher and how focusing on a niche audience has brought them success. 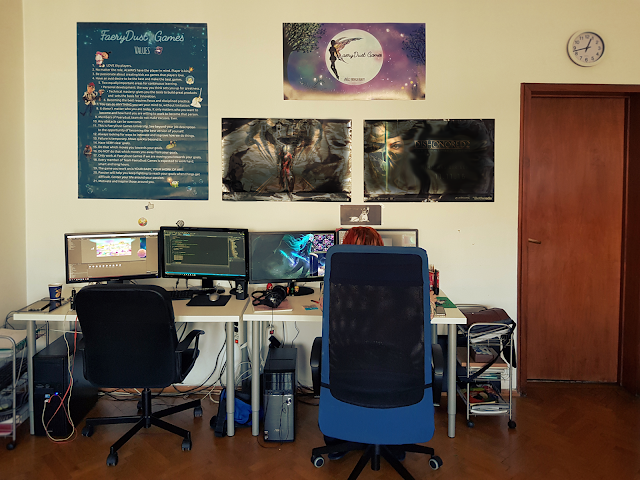 A few years forward until the present day, his studio is now called Faery Dust Games, they are still doing client work, creating military TBS games, but they’re also trying a couple of new things. I’ve visited them at their workplace, in their seventh floor apartment, where they sacrificed the living room to host a small team of seven and turned one of the bedrooms into a combo of meeting room and play area. 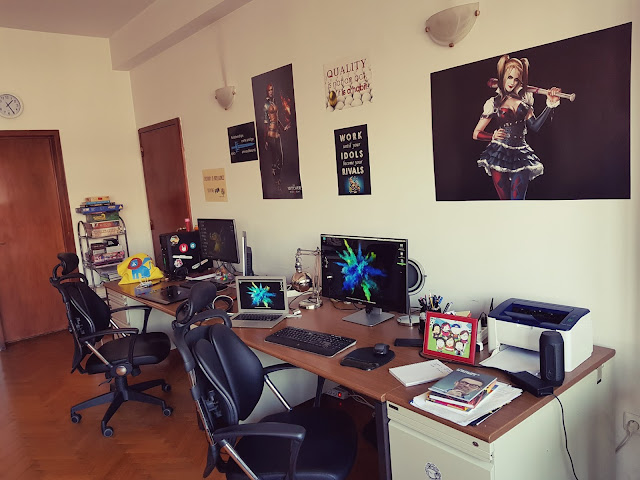 What I liked most about the studio was how cozy and homey everything felt. The place is littered with game inspired art and quotes. And if you look closely enough, you’ll spot a few Easter eggs, like the Civilization VI sticker on Marius’ monitor – he is a major fan of the game. And of giant displays too, he calls the 27″ inch one small, which it is compared to his main screen of around 40″. 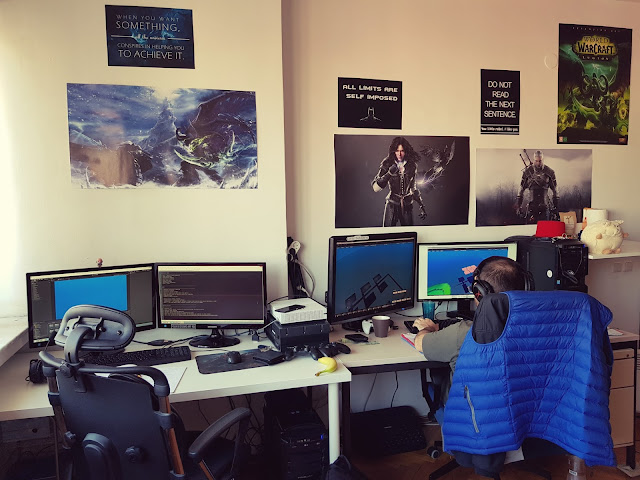 The team was busy working on their various games – yes, a handful of people were tackling several projects at once. So we talked for a while in the meeting room, about their business model, going over how they chose to do client work to ensure a steady stream of revenue and how they want to diversify by working on two indie games.

The first game, Idle Space Tycoon, a mobile clicker/tapper, is in the Alpha stage and it looks very cute and appealing. The game lets you expand your wacky, gold craving civilization, managing a bunch of alien factories, increasing their productivity, researching new technologies and so on. Building business empires on each planet unlocks new worlds and the ultimate goal of the game is to colonize the SoyLatte Galaxy. The developers are now mostly focused on polishing the experience and tweaking the game design until they get that addictive formula these type of games need in order to be successful. 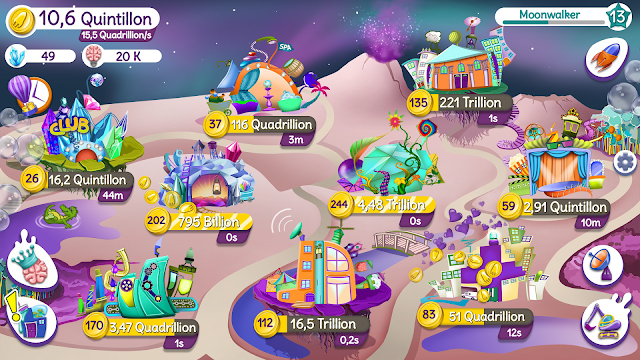 After giving them some feedback and talking a bit about mechanics and user behaviors, Irina was left with a big smile: apparently, without having any idea of their previous talks, I was encouraging Marius to go for a change she had suggested for some time before. Which is so typical to game development, when two minds come up with different solutions to a problem and a third one, unknowingly, makes them look at the issue from a different perspective, leading to a common ground between the first two. 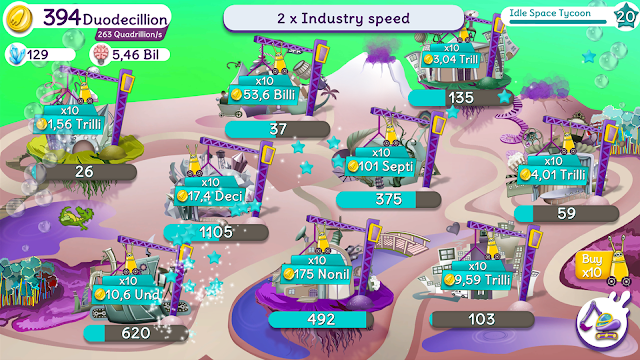 The second game, Dwarfs Village (working title), is a Dwarf Fortress and RimWorld inspired PC game, but with 3D graphics similar to Minecraft. The game aims to create a subterranean dwarf kingdom atmosphere. You gather resources, alter the terrain, build, research and prepare to defend against imminent attacks. And you do all that by controlling your loyal voxel dwarfs.

This game is Marius’ passion project. He spends late nights working on it, handling both coding and design. While he is aware that it’s going to be quite a time consuming endeavor, you can just see the excitement glitter in his eyes when he tells you about the game’s features. He says that they’re about halfway in the development stage, on both programming and art fronts, before launching through Early Access. 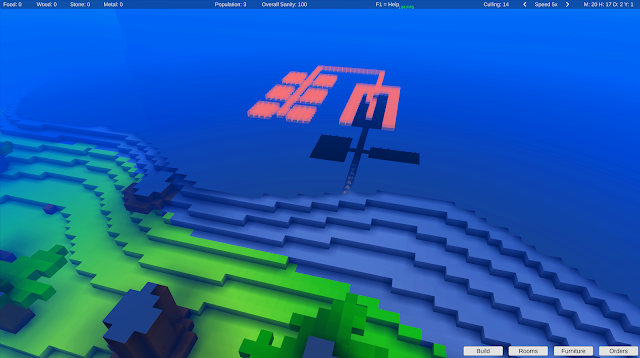 The dwarfs will have various stats you’ll need to take care of, similar to the Sims series. You’ll need to prepare their defense properly, digging tunnels in the mountain, setting up traps and modifying the terrain to your advantage. Even this early in development, the game looks pretty good and seems like a lot of fun. And watching a cute dwarf tending to his pumpkin patch is a very nice treat. 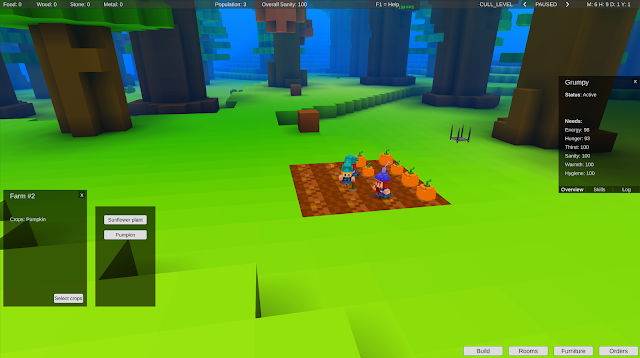 I left Marius, Irina and the Faery Dust Games team a couple of hours later, happy that I had the chance to take a peek into their gamedev process and to have tried their games so early on. I’m very excited to see the final results when they release them. We’ll keep you updated with their progress and we wish them the best of luck developing them!