Rikodu released a new gameplay video on twitter, showcasing their superglue weapon. While the video is short, it’s a chance to get another look at their upcoming game, Second Hand: Frankie’s Revenge.

Made with Unity, the game revolves around Frankie, a discarded robot with a taste for vengeance. The main twist is that you can reassemble Frankie in many ways, to find the combination that proves most advantageous. You can enjoy the game’s challenging, fast-paced combat with your friends, in up to 4 players local or network co-op.

Use a chainsaw as an arm, a large fridge as a body and a disco ball as a head to distract your enemies.

Frankie’s Revenge is the first game from developer Rikodu, an indie studio from Cluj-Napoca. Although no release date was announced yet, the game is not without its accolades already. It was the Indie Pitch Winner at Dev.Play 2016, the Reboot Pitch Winner at Reboot Develop 2017 and a finalist in several indie awards categories, including at Casual Connect Berlin 2017. 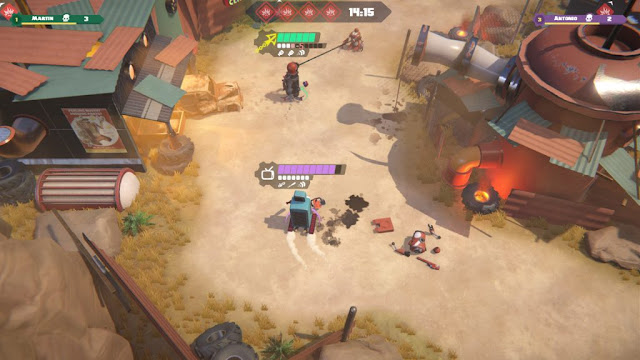 You can watch more of Frankie’s Revenge in the game’s trailer for Reboot 2017, embedded below for your convenience.